2.smelling of fermentation or staleness

1.a small tart usually used as a canape

2.a pastry cup with a filling of fruit or custard and no top crust

3.a small open pie with a fruit filling

4.a woman who engages in sexual intercourse for money

Why art thou tart, my brother? Bunyan.

array, attire, deck out, deck up, dress up, fancy up, fig out, fig up, get up, gussy up, overdress, prink, rig out, tog out, tog up, trick out, trick up[Hyper.]


For other uses, see Tart (disambiguation).
Not to be confused with torte. 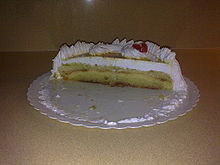 A tart is a baked dish consisting of a filling over a pastry base with an open top not covered with pastry. The pastry is usually shortcrust pastry; the filling may be sweet or savoury, though modern tarts are usually fruit-based, sometimes with custard. Tartlet refers to a miniature tart.

The categories of 'tart', 'flan', and 'pie' overlap, with no sharp distinctions, though 'pie' is the more common term in the United States.[1]

Early medieval tarts generally had meat fillings, but later ones were often based on fruit and custard.[1]

Tarte Tatin is an upside-down tart, of apples, other fruit, or onions.

Savoury tarts include quiche, a family of savoury tarts with a mostly custard filling; German Zwiebelkuchen 'onion tart', and Swiss cheese tart made from Gruyere.

All translations of tart